The choir (above) and Fr. Herald's homily (below) at morning Mass on Day 2. 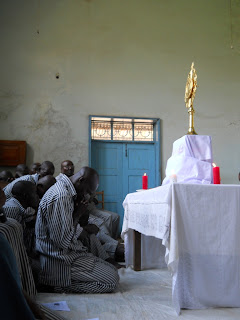 The heart of the retreat in maximum security at Kamiti was the Heart of Jesus in the Blessed Sacrament, which is why most of our time with the prisoners there was spent in Eucharistic Adoration. 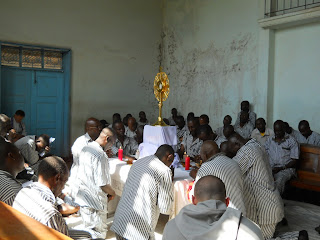 It was an extremely moving experience to see how, almost hour by hour, their awareness of the Presence of Christ grew, and their response became stronger and stronger. At two different points the retreatants were invited to approach the altar of exposition, first to receive the Lord's mercy and healing, and then later to pledge themselves to His service. On both occasions their response was overwhelming

What made this retreat most unique, and even historic, was the fact that for the very first time in Kenya, permission was given to have all night Eucharistic adoration in one of the cell blocks. Br. Juan Pablo taught us a version of the Divine Mercy chaplet in Kiswahili that he adapted, and that we sung as we carried the Blessed Sacrament in procession from the chapel to the cell block. On the second day of the retreat, the procession route had to cross the soccer field right at half-time of an important match with a team from another prison. Hundreds of inmates watched as we carried Christ and sang out for God's mercy. 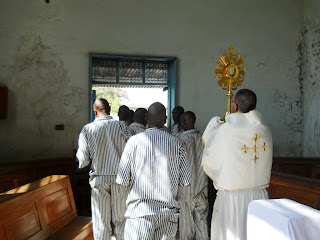 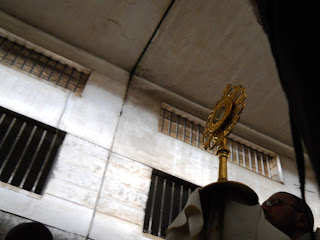 The residents of the block willingly sacrificed some of their very cramped sleeping space to welcome Jesus in the Eucharist, and many of them spent the night in prayer. A Catholic prison guard who was making his rounds in the middle of the night commented: "I know what the Eucharist and Eucharistic adoration are, but I've never seen anyone able to be as close to Him as you are now." 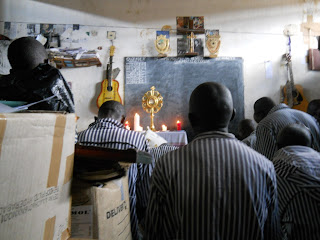 Posted by Franciscan Mission Outreach at 12:00 AM

Promote Your Page Too

Franciscan Friars of the Renewal